The first technology I was learning was Ruby on Rails. I read Michael Hartl’s book several times and created an app following the tutorial. I was reading a lot about Rails, everything I found online that was for free. For example, the video_list app I coded when I was following a course from Udemy. But my favorite lessons were those free lessons from Code School (R.I.P.). They had a zombie theme, everything was explained with brain eating zombies:

During the lecture on college (it is irrelevant, but I remember it was about Don Quijote), I hid the Rails tutorial under the table and read it secretly. I was determined to land a job and become a “real” developer. I was reading and researching for several months until I realised I had to get my hands dirty, I had to code something from scratch on my own! The best way to learn technology is to use it! Of course it seems obvious now, but back then it was a personal breakthrough. And I did exactly that, I built something on my own.

It was an open-sourced app built with RoR. The idea was to create a stackoverflow clone where newbies can ask questions without being judged and without getting the RTFM answers. 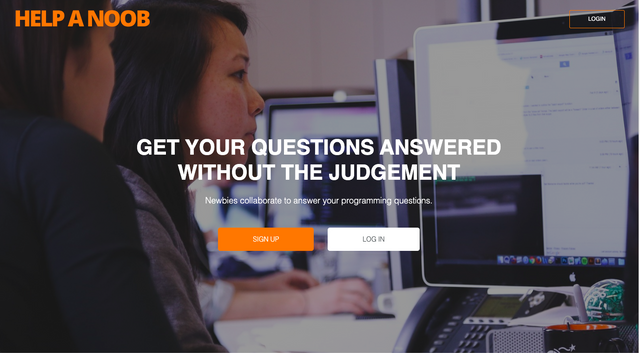 My plan was to create a minimum viable product and then find contributors. I was part of a Facebook group Learn to code with me which is a group for people teaching themselves to code. I announced the app in that community. Dozens of Rails newbies were interested in helping me out.

We had a slack channel, back end devs, front end devs, a designer, a trello board, even some real users! From this team I have to mention Rick Gomez, who showed me that errors in your code are not your enemy. I was amazed at how lightly and easily he could code. It was really fun to watch him! I did not have such courage. I was full of self-doubt, my impostor syndrome merged with depression and anxiety. I still had not had a “real” job.

Help a Noob helped me get more confidence, it turned out I did know something, I was not as hopeless as I thought I was!